How Fast Can You Paddle Board? 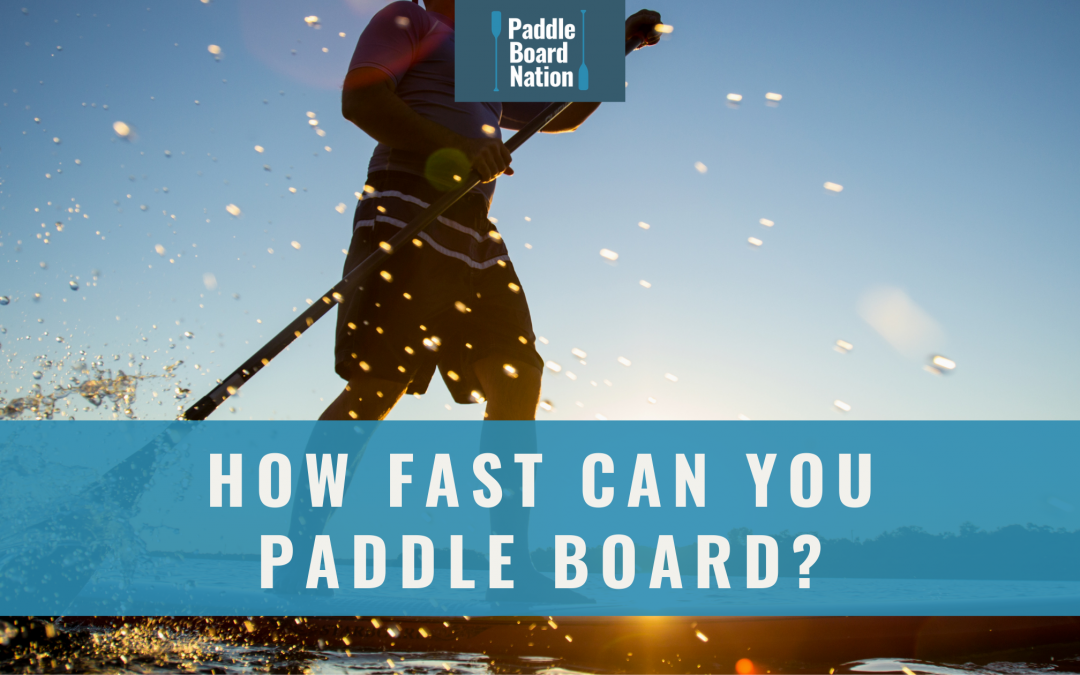 How fast it is possible for somebody to paddle board is a more challenging question than what it might appear. Lots of factors are involved in it which include the speed of the wind, the current, and the size of the waves. In case the question arises in your mind regarding how fast can you paddle board then go through this article mentioned below.

As a matter of fact, stand up paddle boarders will be able to sustain approximately 8 mph as their average speed. On the other hand, the amateurs will be having an average speed of approximately 4 mph. Nevertheless, on a day where there is less wind, the majority of the ordinary individuals will be paddling approximately 2 to 3 mph on average.

The Factors That Affect Your Paddle Boarding Speed

As mentioned earlier, your speed can be influenced by other factors as well. Below, we have stated several things that should be considered while figuring out how fast it would be possible for you to paddle board.

So, let us not waste time and look at the factors closely one by one.

Speed of the wind

Wind can make a significant difference while you are trying to figure out your speed. It will be able to make the difference between going along at 12 mph or even more and going backward. In fact, on a windy day, it will be quite difficult for you to make progress due to a gusty breeze.

While you are on the paddle board, the wind is not only going against your board but also against you. The speed of the paddler becomes quite less while combating the strong wind. However, it is great to paddle along with the wind. It appears that every single stroke will pull you a lot of distance down the shore. As a matter of fact, there might hardly be any need for paddling when there is a strong tailwind.

In case you’d like to paddle your board quite fast, you’d prefer the water to be calm. If you are considering your overall speed, it will be helpful if big swells come from behind you. Amongst the other conditions which might influence the speed of your paddleboard, mention may be made of the debris present in the water including mats of algae, submerged stumps, and floating logs. For example, if the aquatic flora and the algae are quite dense, it might be quite difficult for you to make progress forward.

It is actually the depth which will be responsible for slowing you down. It is particularly true in case the depth is quite shallow. During low tide, make sure to take your own time since even though your fin might be at the bottom your paddle is going to hit it. You will be moving slower since it will not be possible for you to get the full paddle in the water.

The current in the water will be boosting or hindering your progress. It might be a change of tide lashing via an inlet. It might be a windblown current which has been generated in the ocean or it might also be a fast-moving river. In general, fighting against the current will not be a good idea and paddlers will need to paddle using all their might.

It is not surprising that you will be able to paddle harder and faster provided you are fit enough. If you are a beginner when it comes to paddling or are trying to become fitter, it will not be possible for you to go quite fast initially. However, you will be able to paddle harder after progressing in the sport and after your paddling technique and fitness levels have improved. This will help you to glide easily through the water and there will be an automatic increase in your speed as well.

While setting out for the first time on a paddle board, you will observe that individuals around you are traveling much faster as compared to you. Nevertheless, do not be upset by seeing this since it is a fact that they started as a beginner one day and have slowly picked up their speed with the advent of time.

The distance you are traveling

Are you going 300 m or 30 miles? The average times recorded by you on those two distances are going to be different in all probabilities. A professional sprinter usually runs a 100-meter distance on land at the speed of approximately 27 mph. In case he would have been able to maintain that speed, then he would be able to finish a marathon within a span of one hour only. However, it is not possible for him to do so. In fact, professional marathoners will be going at a speed of approximately 12 mph. Therefore it will be imperative to consider the distance traveled while figuring out your speed while paddling.

The type of board used by you

This is an extremely important factor to consider. You will come across different types of paddle boards on the market at present. So, let us not waste time and look at these types of boards below.

It is a fact that incredible paddle boards are lighter as compared to the traditional boards which might make you think that they will be traveling faster. However, you might be wrong. In fact, a hardshell board has the ability to glide further every stroke and is also less affected by the wind, unlike an inflatable board. The conventional hardshell will be outperforming its counterpart on every occasion. Nevertheless, an inflatable paddle board can deliver the goods when you might be paddling downwind on a windy day.

Therefore, in case you’d like to move faster, your best option is going to be a conventional hardshell board. The difference in speed between the two is approximately 10% on most occasions.

It might appear to you that owning a racing board will help to make it faster, and in that case, you are correct. Here, we will take a look at why a racing board is considered to be faster as compared to touring or surfing boards.

As compared to the other 2 types, a racing paddle board will usually be thinner as well as longer. It has been manufactured for enhancing speed.

On the other hand, surfing paddle boards have been built short so that it will be possible to maneuver them easily. They are not going to track almost as straight or even glide as well, unlike a racer.

The touring paddle boards are going to be wider with more flotation. They have been manufactured for providing stability, and not speed. This does not imply that one cannot go fast on them; however, you will be able to go faster on racing boards in case you exert yourself in a similar fashion.

The size of the board

Your speed can be affected by the board’s size to a great extent. You will not get the best performance when it comes to speed in case it is of the wrong size. It is important to figure out the volume of the board and purchase the proper size which will help you to maneuver it through the water easily. A paddle board of the correct volume will imply that the water will be displaced at the proper level which will allow you to move faster.

In case your board is rather small and you are a large individual, you might find it quite troublesome to keep control which will make you go at a slower pace than usual.

It might be quite frustrating for some paddlers when they figure out that they go quite slow on the paddle board; however, it is quite an achievement to be able to reach the average speed while paddle boarding since they are the only thing which is powering it. Trying to maintain your balance on the moving water while propelling yourself in a straight direction is quite difficult. Therefore, if you are able to go fast then it will be an achievement in the long run.

The majority of the paddlers will be moving across the water at approximately 4 mph which is definitely a nice and relaxing speed. Beginners will be moving slower at the beginning, and tourers, as well as recreational paddlers, might preserve their energy for longer trips. For that reason, they might not try to paddle quite hard.

Racers are going to move faster and they would prefer to have a fast paddle board. It will be feasible for them to paddle at an average speed of approximately 6 mph in case they apply the proper techniques. Obviously, in case they have the wind behind them, they will be able to achieve a better performance in the long run.

If you like to get more information on this particular topic, then feel free to read our blog: What Is The Average Speed of a Paddle Board.

Thus, it is evident after going through this above-mentioned article that an individual will be able to paddle board comfortably between 3 to 4 mph without much assistance and effort. In case you like to move faster, it will be imperative for you to work harder for putting the current and the wind at your back.